Hello everyone, I hope you’re enjoying our new digs here at PWPop.com. Snazzy right? Well, along with this fresh coat of paint and new name the site hopes to bring a new perspective as well. We don’t see wrestling and pop-culture as two separate things. In fact, they’re very symbiotic as wrestling uses modern day celebrities, character archetypes and current events to write storylines that the audience can relate to. Whether you’re talking about Rusev and Lana talking about world affairs or TNA using Sons of Anarchy as the basis for the Aces and Eights, a few years ago pop culture enters the ring quite a bit. But it’s not just a one-way street Hollywood uses wrestling all the time in movies, television shows, video games, comic books and other forms of media.

So that was the long-winded explanation for a new column I had the idea for which, as of right now has a working title of “The Pop And Wrestling Connection. This will be the place in which I take an entertainment property and point out some wrestling connections that maybe you didn’t know about. Now, let me get into a little bit of a “warning” this will not be a definitive list of everything wrestling related in every franchise. I do my best but I’m going to miss some wrestling references from time to time. So if you find any instances that I miss in these, you can always leave it in the comments and I’ll always do a follow-up down the road.

Okay, we got that out of the way. Today, I want to talk about wrestlings relationship with something very near and dear to my heart. Teenage Mutant Ninja Turtles. Yes, those fearsome fighting teens. The heroes in the half shell are headed to the big screen after a seven-year absence and I thought it would be to look at the partners in crime professional wrestling and TMNT.

I think it’s only fair to give you a quick overview of TMNT franchise as a whole. Teenage Mutant Ninja Turtles was created by two struggling artists Peter Laird and Kevin Eastman as a joke in 1983. The two would later published their own comic the following year never intending it to be more than a one-shot (a single issue for those that don’t speak comic book) Soon however its popularity grew and this gritty underground comic parodying stuff from Frank Miller soon became a Saturday morning stable for CBS from 1987 to 1996 showing the fun-loving Turtles (Michelangelo, Donatello, Raphael and Leonardo) alongside intrepid reporter April O’ Neil. As with with any cartoon from the 1980s toys were soon to follow and Turtles definitely saw green as they battled it out G.I. Joe as the number one action figure line in the country. They would make the jump to the big screen in 1990 making three live-action films and one CGI , which made hundreds of millions of dollars at the box office. For a while in the late 90s were back in the sewers as the creators battled to preserve the characters. They tried to revive the franchise with a few animated series through 4 Kids TV before their current series at Nickelodeon , who is producing the current film set to hit theaters next week.

So I bet you’re saying, “What are the references to wrestling in Ninja Turtles already?” And why not get started with the animated series which saw many voice actors James Avery as Shredder and Pat Fraley (Casey Jones, Baxter Stockman) , who also voiced roles in the 1980’s WWF “Hulk Hogan’s Rock N’ Wrestling” cartoon. Avery would would lend his talents to Junkyard Dog and Fraley would voice Hillbilly Jim.

And while the first TMNT movie has no references wrestling out right, there’s an interesting preview of its original DVD release in 2002 to a little film from New Line Cinema called “Suburban Commando” which features some guys maybe you’ve heard of them, Hulk Hogan and the Undertaker.

The second feature film in 1991 has some direct references to professional wrestling which include Super Shredder, the evil arch nemesis on the TCRI special cocktail, played by none other than Kevin Nash. Not to mention when the Fab Four meets genetically modified minions Tokka and Rahzar, Michelangelo quips, “Didn’t we see these guys at Wrestlemania?” You also have the fact that Ernie Reyes Jr, who plays Keno in the film, would face The Rock in 2003’s “The Rundown”to add to the list. But that’s not all that happened that year.

Along with this movie sequel came a few more references in 1991 one in the form of Teenage Mutant Ninja Turtles Adventures Intergalactic Wrestling League having our heroes in wrestling gear battling for a way home on a asteroid. Also, there was an action figure of Michelangelo as a professional wrestler (which I still own by the way) 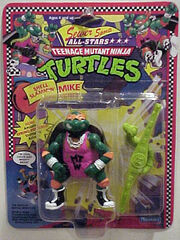 And now let’s get to how wrestling referenced The Ninja Turtles let’s begin with Japan, which had their own enemy series in the UWA/UWF around 1994 there were the Los Turtles

There was also Kowabunga in the USWA from the early 90s.

After seeing this is Michael Bay really that bad. I hope you enjoyed this short look at a little pop-culture crossover between the Teenage Mutant Ninja Turtles and professional wrestling. As I said before, if you have something I missed please put it in the comments and I will talk about it in the future. If you want to read some interesting fanfiction go here